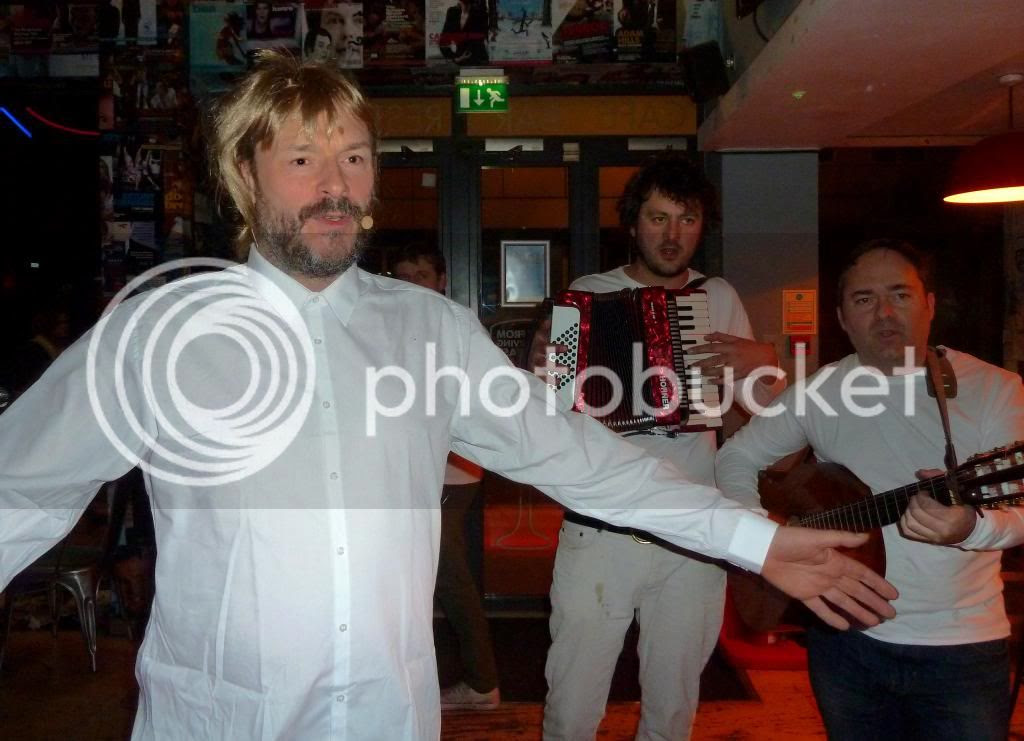 For the last day of Julianuary, I present Jon Breeze, a flashy new-age guru, Julian's latest creation! In his first solo stand up in quite some time, he performed in Soho on Monday, January 27 with several back-up guests. I've heard nothing but good about the show. Hopefully, there's more to come! To read all about it, check out The Velvet Onion's report. (Picture from TVO)
Posted by Sadie J at 3:25 AM No comments: Julian performing a dark penetrating piece simply entitled "Pie". I know a big part of it is the look on Noel's face, but I laugh every time I watch it. I've seen several versions of the skit, but there was an early one where he talks about giving pie to show his love and Noel says "can't you just say you love me?".  It's been awhile since I've seen that particular version, but I think they both had more lines than later ones. It should get old, but it doesn't!
Posted by Sadie J at 3:32 AM No comments:

"I think you'll find that was more like three minutes." Julian with Nick Frost from the Mint Royale video for Blue Song. It's one of my favorite things ever. It's my understanding that Stockholm Syndrome may have been inspired by this video. Check out the whole video here. I hadn't ever seen this photo, so no clue as to where or when, but I'm totally digging it! Notice the album is Parliament! ('Cos they got the Funk!) 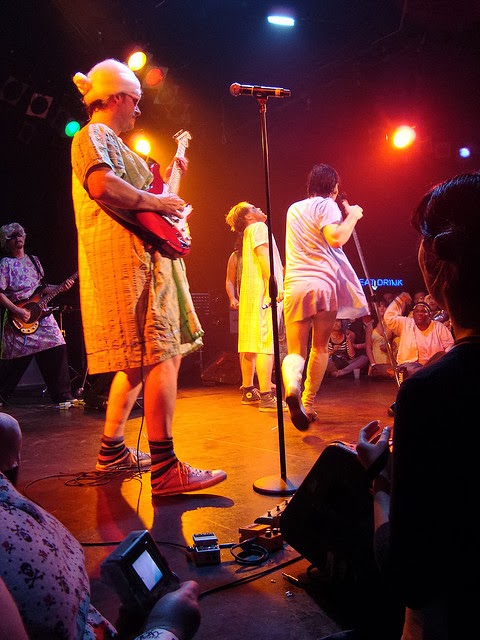 It's not unusual to see Noel in a dress in his every day life, but Julian in a dress is always performance related, or at least so I've seen. He never shows quite as much skin as Noel! He rocks the socks!
Posted by Sadie J at 3:00 AM No comments:

Well, we all know how much they deserve it! Part of Julianuary, a video without Noel where Julian gets to take the lead. The normal Boosh scenario where they just spout out stuff that doesn't make sense. Why do we love them, exactly?
Posted by Sadie J at 10:26 AM No comments: This is the last week of Julianuary, so I'll be concentrating on Julian. I imagine this picture goes with the one I posted earlier in the week here. I'm thinking police detective in this one. Love the glasses! I've started rewatching Nathan Barley again. It's really rather brilliant. I watched the pilot first last year, which I think is a mistake, because then I didn't watch the series until I kept reading things about the show and finally got curious enough. Just start with the first episode if you haven't watched it before. Julian does such a good job of showing how messed up his character, Dan Ashcroft, is. Unhappy with life, he can't seem to get his shit together. I wonder where a second series would have taken the characters? Of course, Boosh fans would have loved it if there had been more Jones!
Posted by Sadie J at 2:51 AM No comments:

Is this really how they film commentaries? While they eat? They laugh too much and don't talk about the episodes enough, just spout out a bunch of silliness, really. I prefer commentaries where the participants actually share information about what is on the screen. That said, I think would enjoy the Boosh commentaries much more if Rich wasn't there. In between his rants the others do impart things of interest. It really seems as if he just likes to hear himself talk. (Sorry, Rich.)
Posted by Sadie J at 11:46 AM No comments:

A bit of nonsense for the day. This gets funnier every time I watch it. And yes, I admit it, I am easily amused.
Posted by Sadie J at 6:24 AM No comments: Barratt and Fielding, the business man and the chav. Okay, we don't have chavs in Illinois, so I have no idea what a chav looks like--I just like the word! Maybe it's The Professor and the TA. Or The Manager and The Rock Star. Limitless ways to go, but there's gotta be a story in there somewhere.
Posted by Sadie J at 5:20 AM No comments: I went out for some milk three days ago.
I met Dali on the street, he knocked me off my feet.

Some early Julian, circa 1997-1998. The Pod is a partially animated TV series he did with friend Tim Hope about a fictional techno band called The Pod. It's a good example of Julian's early work (reminds me a bit of his work in Asylum) where he demonstrates his skill at expatiation.
Posted by Sadie J at 8:47 AM No comments:

The Boosh - My Life in Music

Julian and Noel talk about music, their history with it and it's influence on them. There are two parts, so be sure to watch the second one. Fun on a gloomy day!
Posted by Sadie J at 11:10 AM No comments:

From Nanageddon, when Vince tells Howard to go change into something Goth and they wonder what to do about his hair. My hair is 'brown smoke' so I understand Howard's distress at trying to fix it differently--the options are limited!
Posted by Sadie J at 2:56 AM No comments: 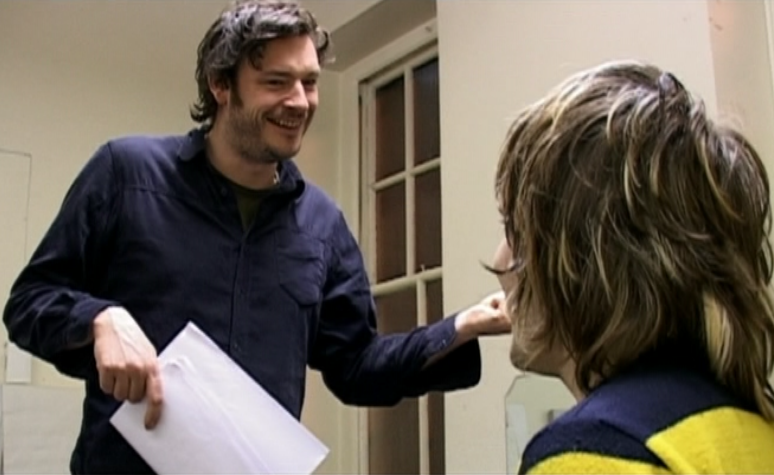 Took a break, but back to Julianuary. How about a picture of Julian smiling, because it's fabulous when he smiles!
Posted by Sadie J at 3:37 AM No comments: 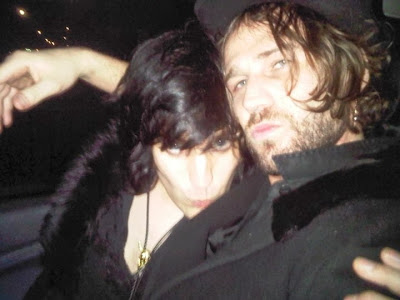 The new cover picture on James Black's Facebook page (of The Howling). Two gorgeous guys that do all kinds of things to my innards! And I think it's best I just leave it there!
Posted by Sadie J at 3:33 AM No comments:

Noel interviews Gary Numan for a Times Online podcast, July 2006. There are 4 parts, it's a bit long. I'm not going to post the 2nd, 3rd and 4th part, you can just click the YouTube links if you want to hear them all. It's a comfortable conversation, both gentlemen participating. Enjoy!
Posted by Sadie J at 3:28 AM No comments:

I missed yesterday somehow. I guess some days just move too fast! So I'm ending this week from hell (or should I say, when Hell froze over) with a video to enjoy. Early Boosh. Sweet!
Posted by Sadie J at 12:12 PM No comments:

Another favorite scene, just because Vince is being such a cheeky brat! You can tell, he just can't help himself. Anything to wind Howard up. From Series 1, Jungle.
Posted by Sadie J at 3:26 AM No comments: 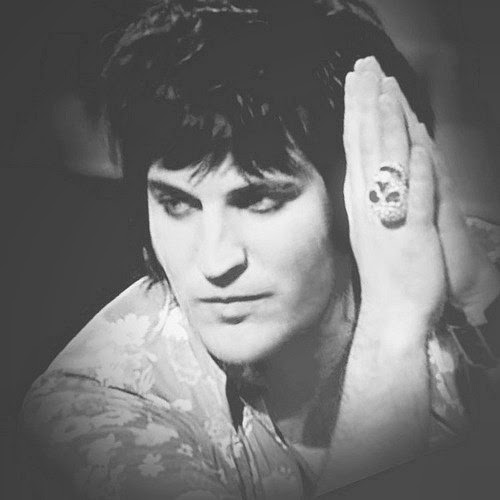 Please indulge me--I'm stuck in the middle of the mess that is Winter Storm Ion, trying to deal with all of the crap that goes along with subzero temps and multi-feet deep drifts. So I need something pretty to look at for just a moment!
Posted by Sadie J at 3:35 AM No comments:

Email ThisBlogThis!Share to TwitterShare to FacebookShare to Pinterest
Labels: noelsfielding Still enjoying Julianuary! A picture I imagine was used as part of a publicity shoot, but I don't know when or for what. Totally gorgeous!
Posted by Sadie J at 4:40 AM No comments: Because, Noel and Julian autographing a mannequin leg. 'Nuff said. (plus, I'm short on time today. Snow, snow, everywhere!)
Posted by Sadie J at 3:00 AM No comments:

Email ThisBlogThis!Share to TwitterShare to FacebookShare to Pinterest
Labels: glitterbootsSource

Ghost of the Flea Okay, I admit it-- I love Ghost of the Flea! I found it quite odd the first time I watched it, but it really grew on me. Can't tell you why. But this Luxury Comedy "behind the scenes" shot tickles the hell out of me! You just know he looked at the painting and went "I think he should be in a Birthday sketch"! Call of the Yeti is one of my favorite episodes (okay, I say that about most of them) but this is one of my favorite scenes. Howard is so excited to be in the wilderness and wants to share, Vince needs people and shops and noise to keep from being bored. And he lets Howard know fairly bluntly, even though it still seems to go right over Howard's head. This actually could turn into a fairly deep discussion about their friendship....
Posted by Sadie J at 10:33 AM No comments: Okay, I said I'm not going to make this whole month about Julian, even if it is Julianuary. Or maybe I will. Anyway, if I was one of those fangirls that is all into shipping, I would have loads to say about this picture. But since I'm not (I'm not---don't look at me like that!) I just enjoy the friendship this photo represents. (There is absolutely no thought in my mind about Stockholm Syndrome either. Just thought I would mention that.)
Posted by Sadie J at 3:44 AM No comments: January has been dubbed "Julianuary" on Tumblr. I'm not going to post a month of Julian pictures, but I will be giving it a nod here and there!
Posted by Sadie J at 3:03 AM No comments: 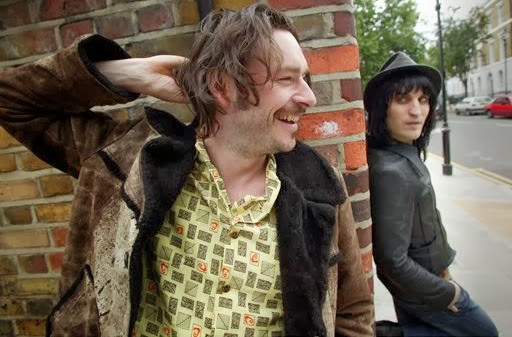 I'm starting 2014 with one of my favorite pictures. What's not to like-- Julian laughing and Noel looking all serious. A bit reverse of the norm!