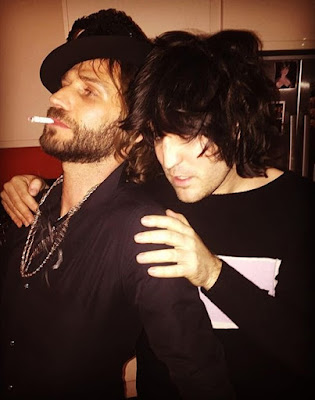 "Daft Punks "up all night to get mucky""
Noel really does have the hottest boyfriends! (from James Black's Instagram)

Merry Christmas From The House of Jones! 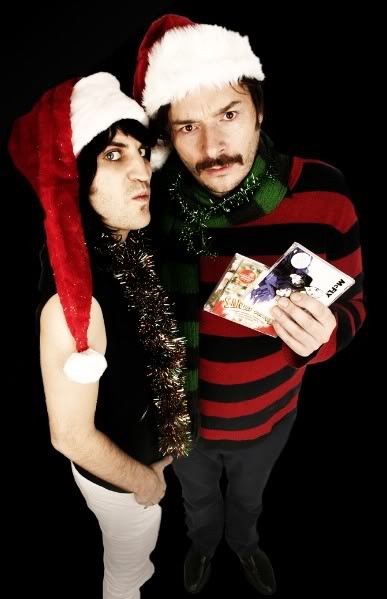 
So, chances are I won't get to see this until/unless it comes out on DVD. But we can always hope!
Posted by Sadie J at 2:00 AM No comments: 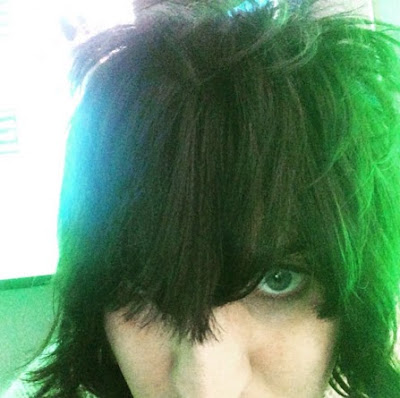 So apparently Noel must have been at the radio station waiting for Lliana to get done with her shift Saturday night because there was a whole series of  "studio cat" pictures on Twitter and Instagram. (At least he wasn't floating in the bathroom. Oh, wait, sorry. That's Welcome to Night Vale, isn't it!) 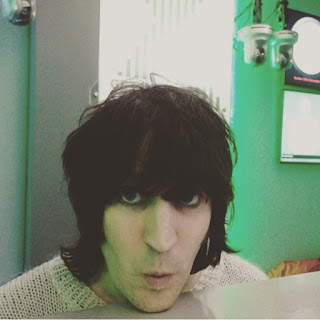 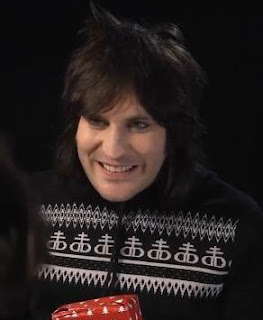 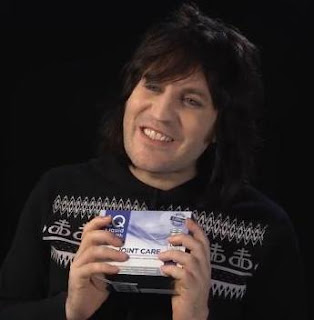 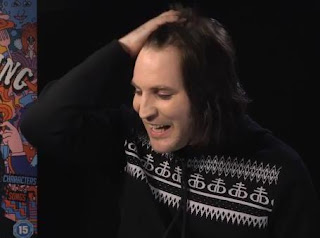 So here's another video from the round of interviews that Noel did last month. In this one, the interviewer asks Noel about his Christmas traditions, how to respond to a less than steller present and difficult relatives. Check it out: Noel's guide to Christmas
Posted by Sadie J at 2:00 AM No comments: 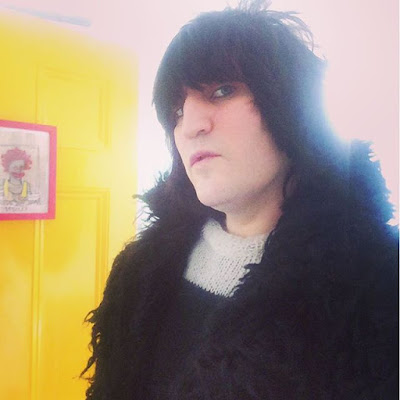 From Noel's Instagram this morning. A bit of sunshine in the middle of December!

Early Julian in an episode of his The Pod series. He really does have the best voice! And I'm sure I'm not the only one that sees a correlation between the story here and Vince's story of living in the jungle. Just saying...
Posted by Sadie J at 4:51 PM No comments:

On BBC Radio 2 with Steve Wright 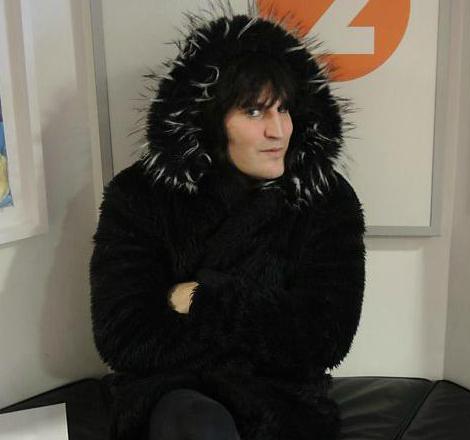 This is a radio interview from November. I thought I had posted it, but aparently I haven't? So now I have!
find it here: 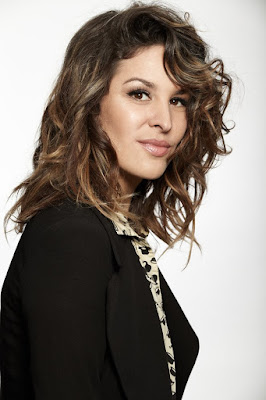 Since I featured Julia last time, I think it's only fair that today should be Lliana's turn! It's a list of her "favorite things" and I'm glad to see a couple of hers is on my list, also (Breakfast at Tiffany's and A Cricket in Times Square). At first I was a little miffed that it ended with "favorite makeup", the feminist side of me going "really, just because she's a woman, they have to list makeup?" and then realized it is a woman's magazine, so cat-claws retracted. Anyway, check it out here at Female First and see if any of her favorites are on your list, too!
Posted by Sadie J at 6:55 AM No comments:

And Now For Something A Bit Different-- Julia Davis 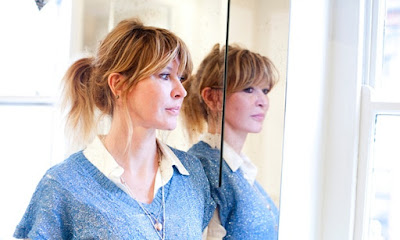 From The Guardian-- a really nice article about Julia Davis. She's so much like Julian, she has a boat-load of work out there, but they stay so private. There isn't many public appearances or interviews. Articles are fairly spaced out-- in fact this is the first of her interviews I've ever read. Usually, it's just a run-down of one of her shows. Honestly, Nighty Night is the only one I've watched, although I want to watch Hunderby, if I can find it. Sometimes that becomes the challenge! Anyway, nice article. She briefly mentions Julian and the boys, but mainly it's about her writing style.

Davis’s most memorable characters are so floridly drawn, they feel like case studies for personality disorders.
Posted by Sadie J at 3:19 AM 1 comment:

Let's travel back in time, back to 2005 I believe, to a short interview that was an intro to some of Noel's standup, which we don't get to see. But we'll take the snippet. I'm totally loving the hat!
Posted by Sadie J at 10:45 AM No comments:

So this is at least five years old, but it's always good for a rewatch! I think Paul is like The Mighty Boosh-- you get him and think he's hilarious, or you just don't get him! Hope you enjoy him like I do. This takes place right before Noel and Julian were in LA and then New York City to take their album (that we are still waiting for!).
Posted by Sadie J at 5:32 AM No comments:

Live At The Apollo.

Noel Fielding hosting Live At the Apollo last month, followed by Dane Bapiste and Al Porter. Not that the other two aren't funny, but Noel just blows it away. I'm sure it's the stuff from "An Evening ...", so it's well worked out, not a hitch.
Posted by Sadie J at 4:28 AM No comments:

The Mood Of It 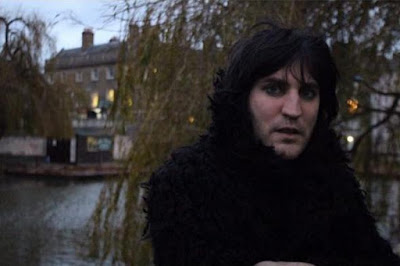 From Noel's Instagram yesterday. (I'm so in love with this Joseph Lynn picture, taken in Cambridge.)

The History of Noel 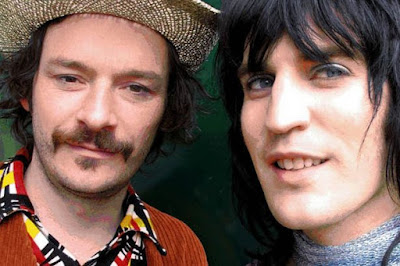 Writewyattuk: The article starts a bit slowly with a run-down of Noel's career then morphs into an interview about his An Evening show and tour. It does get better half-way through, so read it all!

Who do you think the real Noel Fielding is closest to, character-wise – Richmond Avenal or Vince Noir? Or maybe the Moon?
“It was Vince, but I might be getting too old now. I’m getting like the Moon now, forgetting stuff, getting stuff wrong. Those characters I think were the ones that were probably the closest to me, rather than the scary ones like Old Gregg.
“I did like The Hitcher though, because it allowed me to play a slightly more evil character … or as evil as I can go. I’m not very evil naturally. When Julian goes evil, like with The Crack Fox, it’s really quite horrifying. But he’s quite sweet as well.”

Noel Fielding At The Apollo

Live at the Apollo, series 11 episode 3 preview-- Noel was the host. And (I realize this is my own opinion) he outshone the other two comedians. This is just a bit of it, and I've watched it on repeat. And I laugh every-single-time!
Posted by Sadie J at 2:58 AM No comments:

Have I ever mentioned that Dan and Jones are my OTP? No? Well, they are. Possibly because I like things to remain cannon, so in a long running series there isn't often any wiggle room. But with a series that was only 6 episodes, we can create the world we want. And it's funny how so much Dan/Jones fan fiction has become almost cannon across the board. So, for those unfamiliar with Nathan Barley, I present to you, via kinvoya's talents, Jones.
Posted by Sadie J at 10:58 AM No comments: